We would like to thank Radhika and Michael sincerely for their effort and voluntary contributions!

One of the translated questionnaires 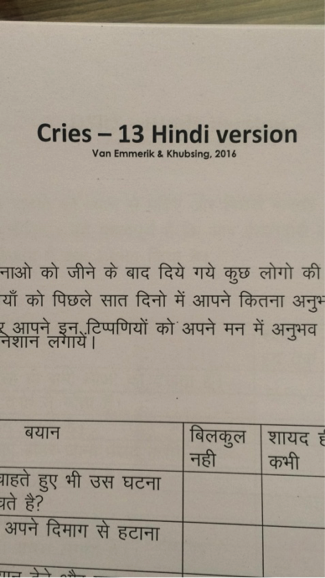 Language rich
I have been staying in India for 9 weeks now, 7 of which in Bal Ashram. I’m speaking more Hindi than ever. Sometimes I have to think long before getting the right grammar and words and other times I’m fluent. I was born and raised in the Netherlands and therefore think in Dutch. I have been realising this here, now I’m speaking almost no Dutch at all. All conversations with the children and the team are in Hindi, save for conversations with two colleagues. Those conversations and all reports I write are in English. When calling home, I do speak Dutch. I’m constantly switching between these three languages, which is hard.

Lately I have noticed I’m starting to think in Hindi and speak Hindi more fluently. Sometimes I feel really comfortable around someone and start speaking Dutch spontaneously, followed by hilarious laughter from the both of us. I just tell that person: “I think I feel comfortable around you.”

22 hours per day, 7 days a week: work
I’m touched by all the stories in the ashram, each one in their own way. The stories of Indra and Sukra hit me hard. These are two boys aged 13, who had been living in Bal Ashram for 1,5 years. They are from the same village. Their parents were in need of money when someone from their village told them that there are job opportunities in a different state. These kids did not attend school and had to join their parents in search of work. This resulted in them working for about 3 years from the age of 8. They worked between 22 and 24 hours a day, seven days a week. Initially their parents were told that the children would receive 1.000 rupee (13,50 euro) a month. The first month both parents received 500 rupee and nothing more after.

The children were beaten with a wooden stick when they were too tired to work or when they asked for extra clothes. The children also had to work through the night and cold, as it can get quite cold during the night in the northern states. Sukra told me that they were forced to drink strong liquor on Holi day (Indian national holiday to celebrate the start of the spring). They were beaten if they refused. They were allowed to shower only three to four times a week (! ) and only rarely received 2 meals a day.

One day Sukra ran away with some other kids, but Indra was too scared to do that. Their slave master caught them and beat them up in front of all other kids, so they would not dare to run away. The police came by a couple of times, but they were bribed by the boss. These must have felt so desperate and unsafe in those moments. “My friend Sunit died there.” I stare at Sukra, in complete shock. I felt asphyxiated and can’t seem to say anything. I have heard a lot of deeply saddening stories, but the death of a child! This is so terrible and sad to hear. I put my hand on Sukra’s  and start writing down his story. Meanwhile I managed  to suppress my tears, because I keep thinking “I have to be there for Sukra.” I kept strong and comforted him.

His friend Sunit died as a result of dehydration and exhaustion. Sukra feels responsible and guilty. He had called the boss when he saw Sukra had collapsed, but the boss came too late. One day Sukra and Indra were freed by Vijay, an activist from Bachpan Bachao Andolan and employee of the Bal Ashram. I asked Vijay later what happened to that slave master. Apparently he was arrested by the police and was dealt a jail sentence of 3 years. My anger lowered a bit, although I still fail to grasp “Why?” I can simply not imagine people are capable of treating others in such ways. And why? Just for the money. Unbelievable!

Back in Holland I also am touched by the stories of my patients, but I notice that I feel the stories from the Bal Ashram much stronger. I suspect this is because these are only children and I have met and lived together with them. In those three months a personal relationship emerged next to the work relationship. A brother-sister connection. It is a beautiful thing, but also complicated at times. 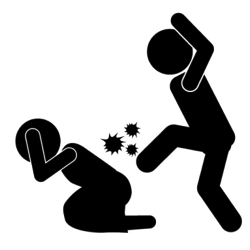 “Every human has the right to mental aid”

The children’s names are fictional due to privacy reasons.