Interview with Surya
Surya a boy of 9 years old, has lived in Bal Ashram since he was 5 years old. He says he has no parents and doens’t remember anything from the time before Bal Ashram. He looks at the floor, fiddling with his fingers and seems to be tense. I feel that something is not right. If you’re 5 years old you can remember a lot. Has he been through a traumatic experience, is he scared or is there another reason why he doens’t remember anything? When I ask if he feels sad, he cautiously nods his head, with a sad face and without making eye contact. Why is he afraid, what’s going through his mind? I have to put him at ease. I gently start aksing some questions, but Surya blocks and keeps repeating that he remembers nothing. Suddenly I get an idea. I have my iPad with me with some games on it. I give it to Surya; “you can play games and meanwhile I will ask questions.” A slight smile appears on his face. Gradually Surya is increasingly open and begins to tell about his past. Sometimes I have to wait, because he’s caught up in the game. But at least I have an opening. His mother is deceased, when Surya was 4 years old and he says to have some memories of this time. He does not know whether his father is alive or not, but if he’d be found, he would not want live with him. He does not miss his father but doens’t say much more. Surya plays some more, and that’s it for today. Next time I will try to learn a little more about his father.

Structure as an important base
Structure gives overview and tranquility. It is therefore advisable in everyone’s life. The team at Bal Ashram also believe in structure. Therefore the children wake up every morning before dawn and start the day with a prayer. To honor to sun, for without the sun there is no life on earth possible. The children at Bal Ashram are divided into six groups for different chores to be done, but also for the morning ritual. The children are standing neatly in line with their own group, ranked from smallest to largest. The staff also participates. I experience it as a pleasant ritual; facing the sun with eyes closed and our hands together at our heart. We say some prayers. Positive energy and peace is what I experience. If we do open our eyes after a few minutes, we see the sun gradually appearing from behind the mountain. I feel blessed tobe able do this every morning. 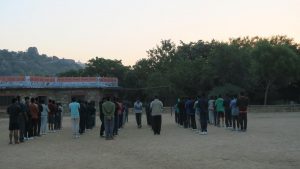 Morning run
After the prayer, it is time for running; about 2-3 kilometers in the area of Bal Ashram. All children and some team members. I also started running in the Netherlands this year. I get jitters of joy when I see the children running. I purchased a sports outfit and I run as often as possible. 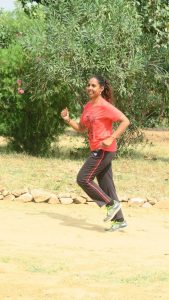 Rishma Khubsing
“Every human being has the right to psychological help”

* Due to privacy the name of Surya has been changed.