Three weeks ago I traveled from the Netherlands to India. After two intensive years with regard to my job, education and our foundation I was ready for some rest before I go back to work. That’s why I traveled to India two weeks earlier than planned, so I could recharge my battery.

First, relaxing and culture sniffing in India
These first two weeks I spend time with my family in India. I also celebrated India’s Independence Day, along with a friend of mine, Archanaji (manager of Mukti Ashram), Mr. Chaurasia-ji (Chairman of BBA) and 44 children in the Mukti Ashram in New Delhi. This was a special experience. The children sang the national anthem and the Indian flag was honoured. Mr. Chaurasia-ji gave a speech in which he incorporated my family history and that of many Hindus / Indians in the Netherlands. We had talked about it earlier; how my grandparents were abducted and recruited during the British rule. His speech touched me because I only then realized how important Independence Day is. Not only for Indians in India but also abroad, among others in the Netherlands. 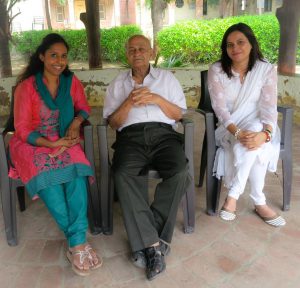 From left to right: Rishma, dr. Chaurasia-ji and Archana-ji in Mukti Ashram

Working for the Foundation anyway
In New Delhi, where the headquarters of BBA is located, I also met with executive director Dhananjay-ji. It was a bit surreal to meet each other for the first time in real life after two years of contact via email and phone. I became more and more enthusiastic in our meeting. Also Dhananjay-ji was enthusiastic; about our foundation and on my arrival. He told me that three psychologists have been working in the Ashram’s in the past two years but without success. There was to little experience with the complex problems of the children. We discussed the psychological education workshop for the staff and the usefulness of the scientific research of the treatment for structural psychological treatment. Dhananjay-ji emphasized that it is important to get to know the children first and build a relationship before starting the treatments.

I can not wait to finally meet the children. Until the next blog.

Namaste, Rishma Khubsing.
“Every human being has the right to psychological help”